Written In Red (The Others Series Book 1) By Anne Bishop 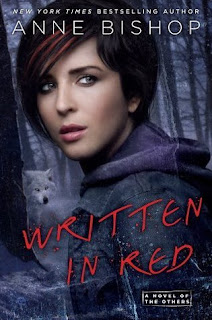 Anne Bishop has created such a unique and wonderful world in these books! The Others are the indigenous species that inhabit a majority of the Earth. They have been around long before humans. Humans developed on their own coninent and eventually started to explore other parts of the world. That's when they met the Others. The Others are shapeshifters, and at first they destroyed every human they came in contact with. Humans are just meat to them. After many years the humans developed technology and the Others started to see the value of trading with them. So the first few human cities on the Others continent were built. Eventually the Others and humans traded more and all the land they allowed cities and technology to be built on were leased to the humans. The Others built courtyards within the cities, so the humans and Others would have ways to communicate with each other.

This book series is all about Meg starting a new life, and how her journey impacts the Others and the whole world! It is absolutely incredibly well written, and one of the best I've ever read! I highly recommend it!