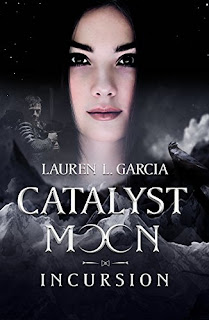 Mages are kept locked away from the rest of the world. Guarded by Sentinels, who protect the people from the mages, and the mages from the people. Really mages are held prisoner. They have no freedoms. Kali is a mage being transferred to Whitewater City. There are eight Sentinels to guard her, and she is shackled inside a carriage. The group is attacked and one of the Sentinels, Stonewall grabs Kali and they get away on a horse. Before they get out of the carriage, Kali grabs the key to her shackles and frees herself. Now they are galloping for their lives, and Kali uses magic to try and help them escape. As she releases the magic, her and Stonewall dissappear! They next thing they know, they are days away in the middle of nowhere. Kali has no idea how they got there, and Stonewall is freaking out. Magic doesn't work on him. So how did they end up here? Now they must figure out how to get back to Whitewater City. All the while avoiding raiders, gypsy's, bandits and anything else between then and safety.

I enjoyed this book. It's very well written. The dialog is great, and the characters are captivating. I think the series has potential. I would love to read the next book. I definitely recommend this book!