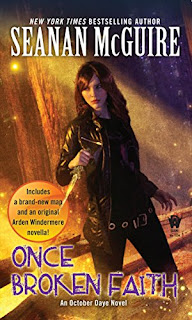 Sir October "Toby" Daye is a Knight of the Realm for the Kingdom of the Mists. She was responsible for helping an alchemist discover a cure for Elf-Shot. Elf-Shot is a way the Fae found to get around their most sacred of laws. Oberan's Law, no killing a pureblood Fae. It puts the person whose been shot to sleep for a hundred years. To the Fae, who are immortal, it's no big deal. However to changeling's it's deadly. Changeling's are half or part Fae and human. The High King of the Western Kingdom has conviened a conclave to determine if the cure should be made public. The Kingdom of the Mists is hosting it since the cure was discovered by one of its subjects. The High King and Queen requested Toby be there. Their son is her squire, but his parentage has been hidden as he is in a blind fosterage until he comes of age at thirty. So Toby and her squire Quentin go to the conclave, and as the natural order of things go in Toby's life all hell breaks loose! Some monarch gets killed and it only gets worse from there! Now Toby has to find a killer and keep everyone at the conclave safe!

This series is one of my favorite urban fantasy series! I was honored to be chosen to review it! The dialog Seanan writes is incredible! You just instantly fall in love with her characters! The world she has created is imaginative, creative, and full of awesome fantasy! She has taken this series to new heights, with each book she puts out! If you haven't already started this series, I highly recommend it! It's one of the best I've ever read!

There is a novella attached to the end of the book, about the Queen of the Mists. It takes place directly after the book ends. It's great too!