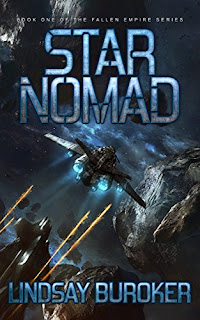 Alisa is an alliance freedom fighter pilot. She was injured in a final battle above the planet Dustor. She wakes up months later and the war with the empire is over. She is stuck on this planet with no way to get back home. She received a letter that her husband died on her home planet. Luckily her daughter survived. Ten years before her mother's freighter, The Star Nomad, was impounded on Dustor. The ship junk yard it's in now is in ruins, and she has no way to get off the planet. So with the help of her friend Mica, an engineer for the alliance, they find the Star Nomad to make her space worthy again. What they don't expect is to find it already occupied by a cyborg. The cyborgs were high officers in the empire. This cyborg won't give them the ship unless they agree to take him somewhere. So Alisa takes on a security guard and a couple of passengers to pay for the trip. What she doesn't expect is pirates, space mafia warlords, and remnants of the Empire military. Just who is this cyborg? Did the passengers she take on board come with bad baggage? All she wants is to get home to her daughter. She has no idea what awaits her, as she boards The Star Nomad and sets off for home!

This is a great book! Lindsay really has a way of writing her characters that draw you into the story. Once you start reading this book, you just can't put it down. It's funny, action packed, and a very well planned out first book in a series. The world she created has giant potential. There are multiple books in this series out now. I look forward to reading the rest! I highly recommend reading this book!