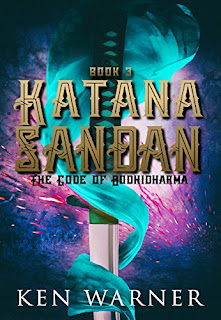 Katana has mastered three of the Chen Do. Mysterious powers of the chi. She is one of youngest students to ever achieve this. While studying her third year at the Hall of The Dragon, she is tested by masters from all over the world. The Head Master of the Shaolin Temple himself wishes to test her abilities. Meanwhile an assassin has attacked and is killing off Arashi all over the world. Katana is training hard to face the trials, the Arashi threat, and the assassin. Many long buried secrets have been uncovered at The Hall of The Dragon. Can Katana stay on the path of light and find a way to face her enemies?

I am totally enthralled with this series! The unique style of martial arts is incredible. This book is the turning point in Katana's life. She has to learn to find herself so she can fully embrace her powers and abilities. I feel the author Ken has done a great job of preparing the characters for what's to come. The true battles in this series have only just begun! I highly recommend picking up this series! I wouldn't be surprised to see an award in this series future!