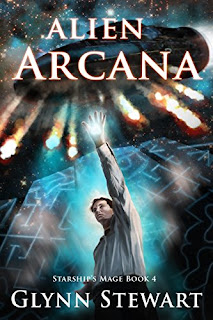 Damien Montgomery is a Hand of The Mage King. He is the only Hand who is almost as powerful as the royal family. He is rune wright. Only members of the royal family are rune wrights. This is a closely guarded secret. War is looming with planets in the Empire who abhor magic. Even if it's required for ships to travel to one system from another.

Damien is sent to investigate the death of a professor on an archeological dig. Damien arrives and discovers what the professor was killed for finding. Proof that there is a conspiracy with the government and possibly even the monarchy itself! Proof that could shake the very foundation of the Empire.  Damien barely escapes the planet alive and makes it back to the palace on Mars. The king sets him on a dangerous mission to discover the traitors, and bring them to justice.

Every book in this series just makes my mouth water for more! The characters Glynn has created draw you in and enthrall you. You are on the edge of your seat the entire book. He is an amazing author with great talent. I hope this series gets nominated for awards. It and Glynn definitely deserve it! I highly recommend reading the series. I'm including links to buy all four books.

I was also blessed to interview Glynn about Alien Arcana and The Starship's Mage series. Click on the link below to read it!

Click here to buy a copy of book 1 on Amazon

Click here to buy a copy of book 2 on Amazon

Click here to buy a copy of book 3 on Amazon

Click here to buy a copy of book 4 on Amazon

Click here to read my interview with Glynn Stewart
Posted by John Piper at 3:25:00 AM