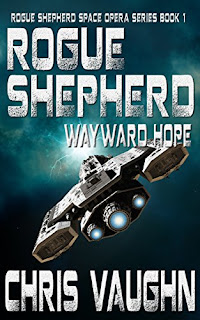 Luke Shepherd is the youngest son in his family, of The Twelve Clans. A group of planets and clan that rule their section of the galaxy. They are ruled by a king, who calls himself General, believing that the people need a figure of military strength in the war. Luke is constantly running supplies to his brothers out on the front lines of the battle. He is looked down on and ridiculed by his family, but out of duty and honor he perseveres through it. On his latest run, he encounters a Clans ship being attacked by the enemy. He helps save the ship, and barely escapes alive to make his delivery. He sets down on the planet his brothers are on and heads directly to the temple to pray hi thanksgiving for being delivered to safety from the battle. While praying a priest comes and prays over him. He commands Luke to stand and prays over his in a strange language. He then anoints him in holy oil, and gives Luke his sword and pistol belt, and his red cloak of office, which happens to be the High Priest of the The Twelve Clans. Little does Luke know that this day is the beginning of a whole new life!

I really enjoyed the book. The main character Luke is very likable and easily draws you in. I like the world Chris created, and really enjoyed the incorporation of faith into it. I like how fast the story progresses. It's not rushed or too slow, and I really liked the ending. Chris has some very unique writing skills. I highly recommend picking up a copy while it's on sale for only $0.99!

Click here to pick up a copy on Amazon